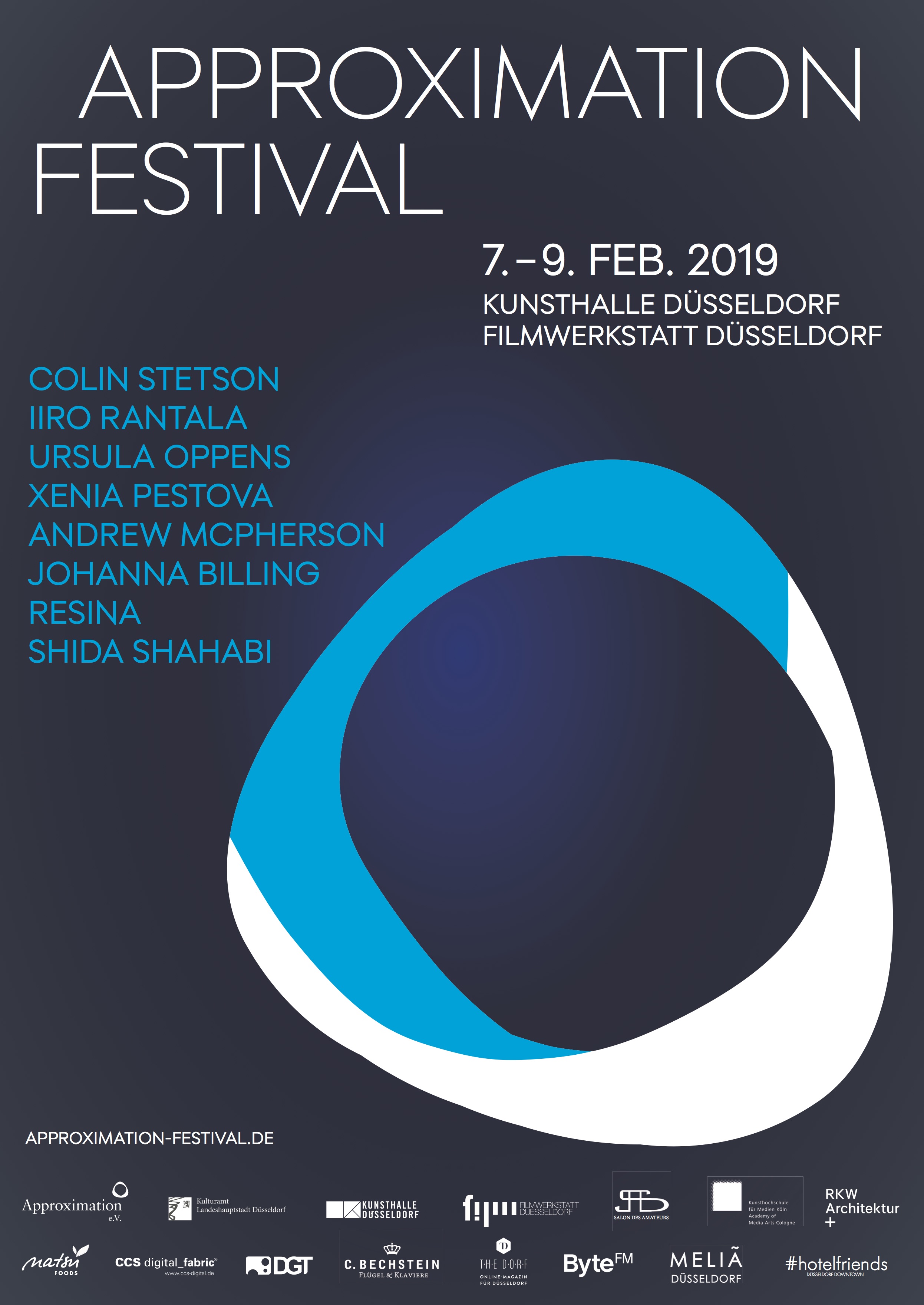 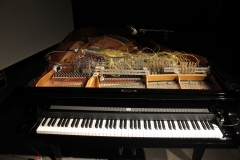 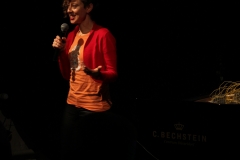 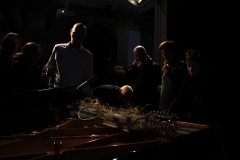 Johanna Billing, Pulheim Jam Session, 2015, HD, 22,40 min, loop
Pulheim Jam Session is a film about a place, but it is also about the logic of staging and playing out of an event. A car jam and a jamming session are two distinct kinds of activity, both with their own freedoms and constraints. In its initial incarnation Pulheim Jam Session was a participatory act as part of the project series Stadtbild.Intervintion in which more than 60 cars carrying over a hundred people from the Pulheim region of Germany, situated within commuting distance from Cologne, took part in constructing a traffic jam in a countryside area. During the 70s Pulheim’s 12 disparate villages were reformed and became ‘Pulheim’, a constructed city that today consists to a large extent of rural inbetween spaces, which has lead to a strong car dependency among the residents. Statistic says that each family has 2.7 cars per household. With a similar organizational structure of a music festival, involving red cross safety van, outdoor toilets and volunteers in yellow jackets, the traffic jam here turns into something opposite of the frustration it usually is: a pause, a hiatus, a temporary stop in time. To an industrial backdrop of plumes rising from fossil fuel and wind turbines behind fields of corn and turnip, people spontaneously start to busy themselves; eating fruit, doing crosswords, play around with their dogs in the fields and talking. Parallel to the car jam, in a nearby barn, the Swedish musician Edda Magnason is improvising on a grand piano. Forty years earlier, on 24 January 1975, in Cologne, in the same year as Pulheim’s reform, the American pianist Keith Jarrett held a live improvised concert in Cologne Opera House: the now-famous Köln Concert. These two historical events are connected by their geography and by people’s memories and experience of the area. For Billing, with her sociological interest in the phenomenon of the traffic jam and the intertwining of private and public space, these connections as well as the idea of a recording serving as an aide-mémoire, bound these events into a space constructed between document, memory and repetition. In the film Magnason’s improvised musical performance, acts as a ‘soundtrack’ generated from within the film shoot itself, providing the rhythm and structure for work, dictating the editing and enabling the two events to interconnect.

Johanna Billing, I’m Lost Without Your Rhythm, 2009, HD, 13,29 min, loop
The video is based around the recording of a live choreography workshop involving amateur Romanian dancers and acting students at the Periferic 8 Biennial of Contemporary Art in Iasi, Romania in 2008. Led by renowned Swedish choreographer Anna Vnuk, there is no final performance as such: the resulting video weaves several days’ activity into a continuous process of live improvisation between choreographer, dancers and local musicians, watched by an audience who were free to come and go. The project was an attempt to explore, along with the participating individuals and the audience, what contemporary choreography can be, or means today, especially in the cultural context of the small city of Iasi where there are few opportunities to enter the field of contemporary dance. With a nod to choreographers like Yvonne Rainer’s explorations of everyday movement, Billing investigates the sense of having a body and how we perform our being. Paying tender attention to small details, Billing focuses the mind on the social body – the body among others, the body aware of itself. The work’s soundtrack is a combination of the percussion based improvised live music performed at the event in Iasi, and a version of the song ‘My Heart’ (originally written and performed by the Swedish drum and vocal duo ‘Wildbirds and Peacedrums’ in 2009), reinterpreted by Johanna and a group of fellow musicians in a Stockholm studio. The final video was created through a lengthy post-production editing process, in which the dancers’ movements, the activities taking place around them, and the rhythm of the music are reconstructed into a new choreography – perhaps closer to the everyday struggles and surrounding obstacles than might first be imagined – including climbing over institutional structures and running through hierarchical corridor

Johanna Billing, I’m Gonna Live Anyhow Until I die, 2012, HD, 16,29 min, loop
Set to a whistling violin soundtrack containing improvised interpretations of songs by the 70s experimental musician Franco Battiato, Billing’s video follows a group of Italian children running around the streets of Rome, seemingly doing what they like, having abandoned their parents at the restaurant, “Al Biondo Tevere” (the restaurant where Pasolini had his last meal before he died) After running through the park of the Roman Aqueduct, a courtyard in the 1930s working class district of Testaccio, and Ostia’s Seadrome, the children finally arrive in an empty school in the centre of Rome, where time seems to have stood still. In a classroom that has been turned into storage they start to play around with troves of outdated educational tools and equipment as to try to understand what to do with them. Little by little, each child begins to compose black blots on sheets of drawing paper folded in half, creating blots that resemble those of the Rorschach test. Influenced by her time in Rome during protests against university reforms in 2010, Billing focuses the work on the future of the younger generation and the populist political will which has been undermining the education system. The work alludes to psychoanalysis, to Pier Paolo Pasolini and his thoughts about Italy’s social and cultural changes. Billing’s project also mines Italian history of progressive pedagogy, conducted by leading figures as Bruno Munari with his tactile workshops for kids as well as championing the early tradition of Italian filmmakers, who in their often biographical films about the 40s and 50s, focused on the freedom of children exploring their city as a way to reflect upon historical and the societal changes.

Johanna Billing, Magical World, 2005, HD, 06,12min, loop
Magical World was shot during a summer day in 2005 in a free after-school center in Dubrava, a suburb of Zagreb. The looped and therefore never ending footage of children rehearsing the 1968 Rotary Connection song “Magical World” (written by Sidney Barnes) acts as an anthem for an uncertain future and presents a glimpse of a country in transformation. Rotary Connection was one of the first racially mixed bands in the US, playing a mix between psychedelic pop- rock and soul music. Active during the social upheavals and the civil rights movements of the 1960s, they reflected, in their personal songs, a desire for change without being – at the time – explicitly political. The film juxtaposes the historical context of this song with the real life of a generation of children growing up in a relatively young country facing the fast-paced development taking place in the face of European demands for future integration into the group of member states. The children, who were all born after the Yugoslav wars of the early 1990s, deliver a haunting and hopeful rendition with reservation and pride. In forced and newly learned English, a young Croatian boy sings the enigmatic and defiant first lines; “Why do you want to wake me from such a beautiful dream? Can’t you see that I am sleeping? We live in a Magical World…” The images move from inside the music room to the outside, capturing the worn down surroundings of this cultural centre that was constructed in the 80’s but has been left unfinished, mirroring a community still recovering from the break-up of the former Yugoslavia.